A new park behind Vroman’s Bookstore gets the green light from City Council.

Playhouse Park will help to fill a park-starved gap in Downtown Pasadena, and finally after years of advocacy, the Residential Impact Fees that new residents have paid will start to yield benefits for the people who paid those fees.

IN CASE YOU MISSED IT…

Here is the info we’e previously posted and continue to work on:

Residential Impact Fees (RIFs) are assessed for the specific purpose of satisfying the additional demands on parks that new residents create. 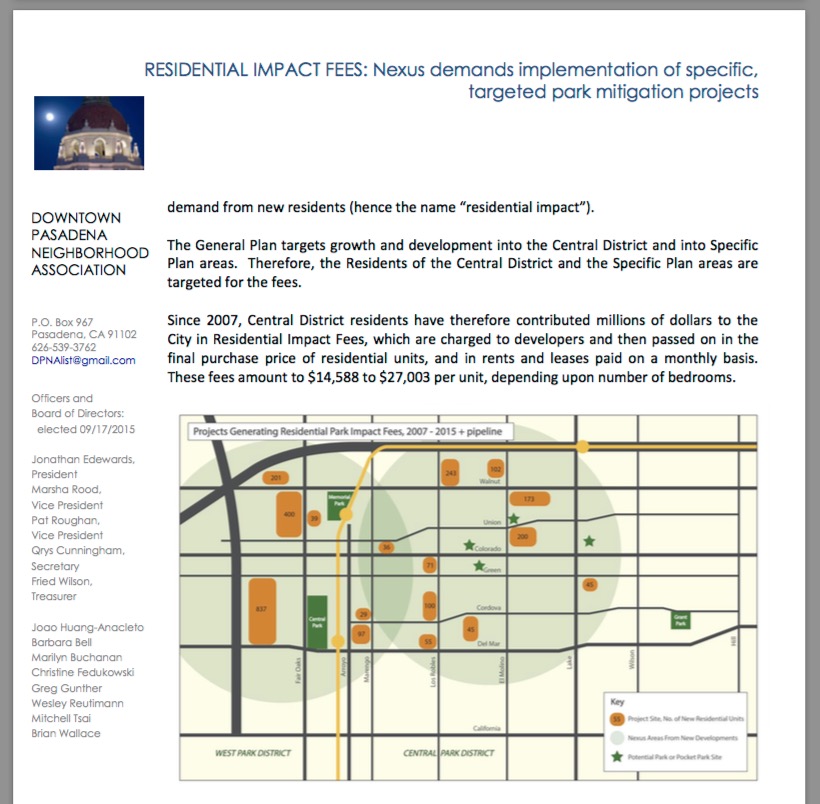 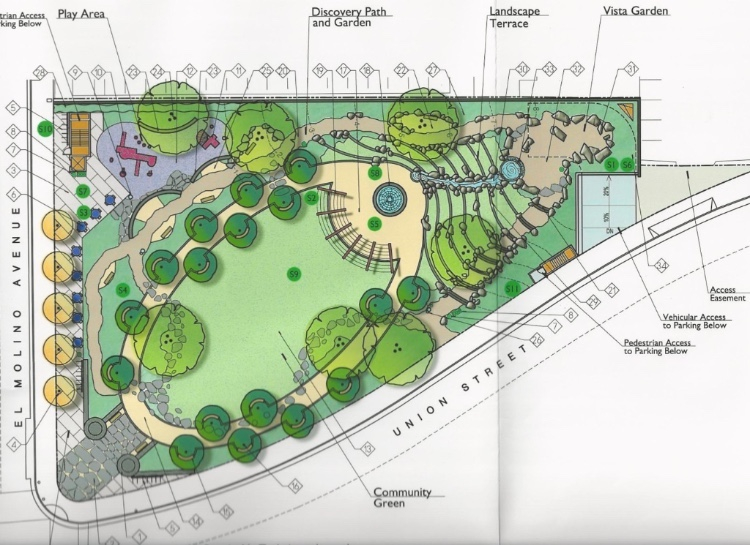 “Playhouse Park” design by Korn Randolph, for corner of El Molino & Union St. When this park was being proposed, the Residential Impact Fees fund (in the “Central” park district) was empty. “Park Now” proponents of the Playhouse District park had to seek funding elsewhere, by applying for a state grant, which was unsuccessful.

As it stands, the city is divided into 3 “park districts”, pictured below.  Park fees have to be spent in the district in which they are collected.  This 3-district division does nothing to insure that the fees are spent close to the apartments & condos building from which they are collected.  In addition, the 3 districts are a clunky, arbitrary division that has resulted in lots of funds in the West District (because of the Westgate project, etc), and fewer funds in the Central and East District. 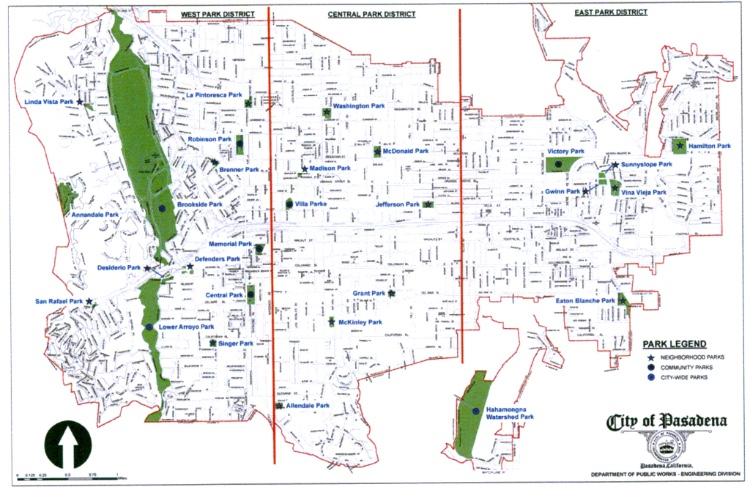 The 3 “Park Districts”.  A new apartment building built in the “West” district would be taxed the Park Fee, and those fees have to be spent in the “West” district, for example.  Ideally, a resident should be able to WALK to a nearby park. However, the districts are so large that there is only a driving relationship (or “nexus”) between where the funds come from and where the funds are spent.

How much did you pay in Park Fees?
How much is built into your rent?
Look it up! 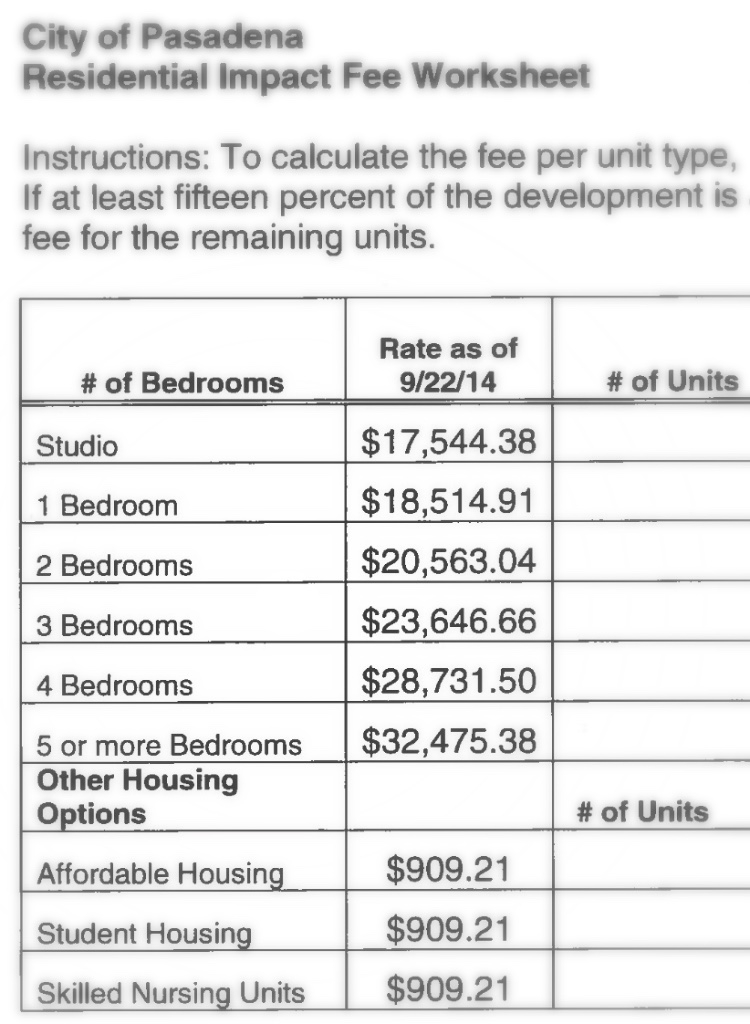 *Projects built before about 2005 were not assessed a fee.  Fees are paid upfront by developers when they pull a building permit and trickle down to unit owners and renters indirectly.  The actual economic consequences to unit owners and renters is complex and is dependent on how developers respond to increased costs (which effects the supply of housing and therefore the overall price of housing), whether or not fees are actually used to improve parks nearby, and how the market responds to such park improvements, among other factors.

The majority of Park Fees are collected from new apartment & condo buildings that are built in Downtown—the Central District.

There is a large “gap” in Downtown with no park. 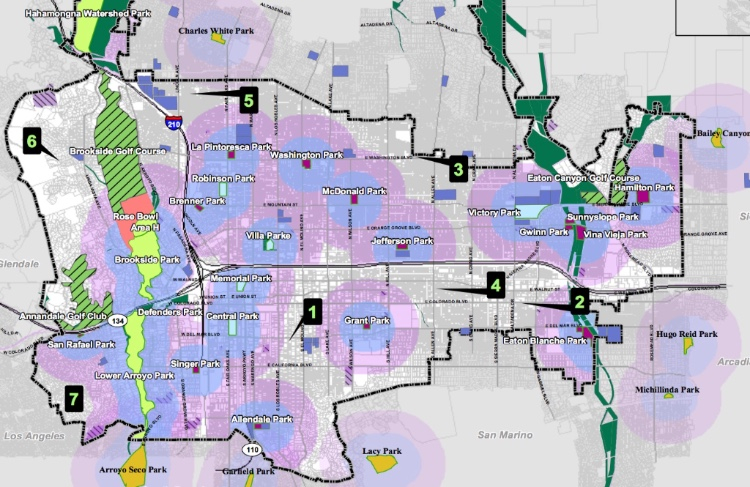 Green Space “Gaps,” where parks are more than 1/2 mile away (grey areas). The Downtown Gap (#1) has the highest population. 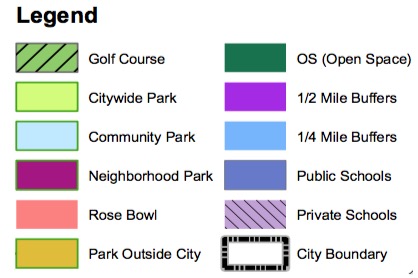 There are about 20,000 residents in Downtown Pasadena.
1/7 of the city’s population.

So… where have new parks been built from the $19 Million raised in Park Fees? 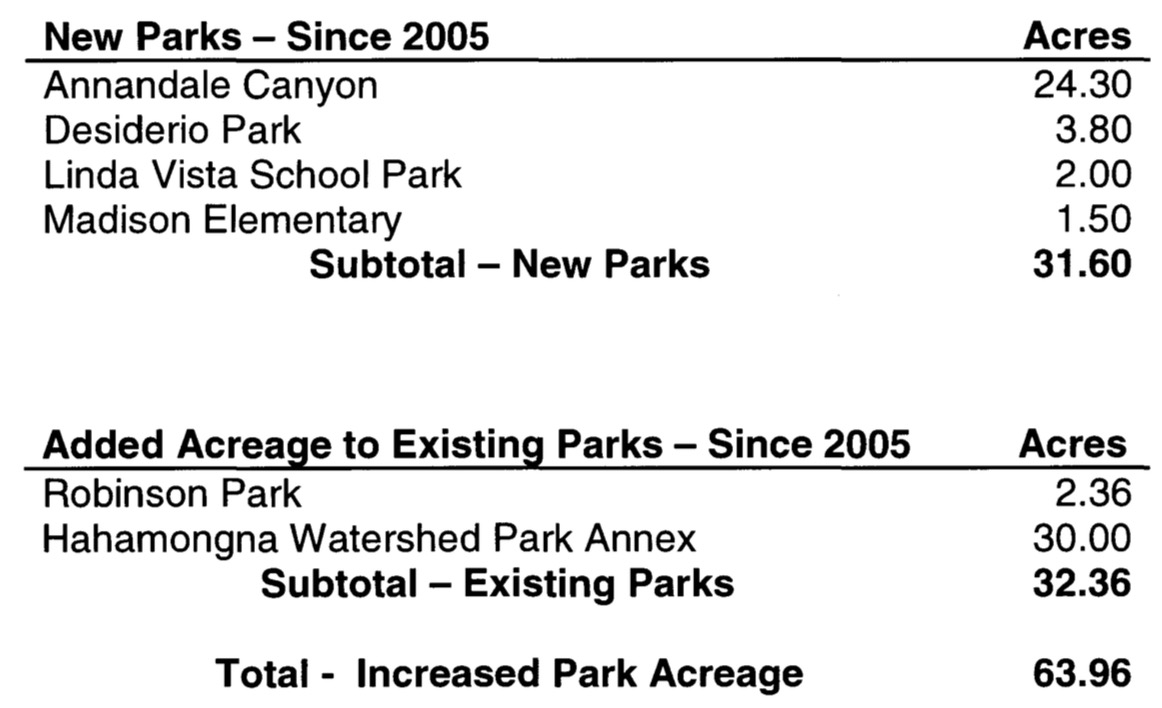 ANSWER:   Not in Downtown Pasadena.

In fact, the city is proposing to reduce or eliminate the Civic Gardens in front of City Hall, by building the YWCA-Kimpton Hotel project, further reducing park space in Downtown.

The “YWCA-Kimpton Hotel” proposed project that directly faces Pasadena City Hall. In the 1920s, the voters of Pasadena purchased the land on which City Hall sits, and surrounding parcels for the purpose of creating a “City Beautiful”-style City Hall surrounded by Public Gardens.
The current proposal will destroy the gardens and place the rear-end of a hotel facing City Hall, with private hotel rooms on the ground floor.

However, some of the funds were spent to improve existing parks, including a new playground in Central Park. 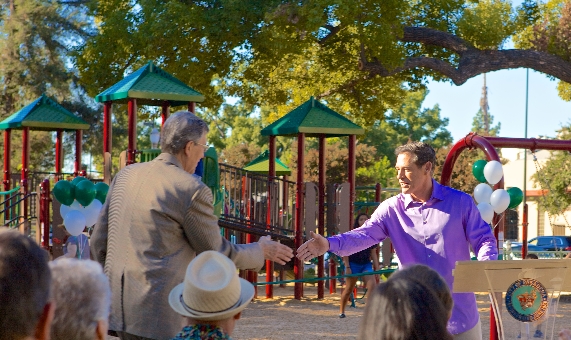 Steve Madison and Bill Bogaard at the dedication of Central Park’s new playground.

The DPNA believes that the Residential Impact Fees need to be spent close to where they are raised.

Downtown Pasadena has a shortage of parks.