Please attend and speak up!

and/or send an email to cityclerk@cityofpasadena.net 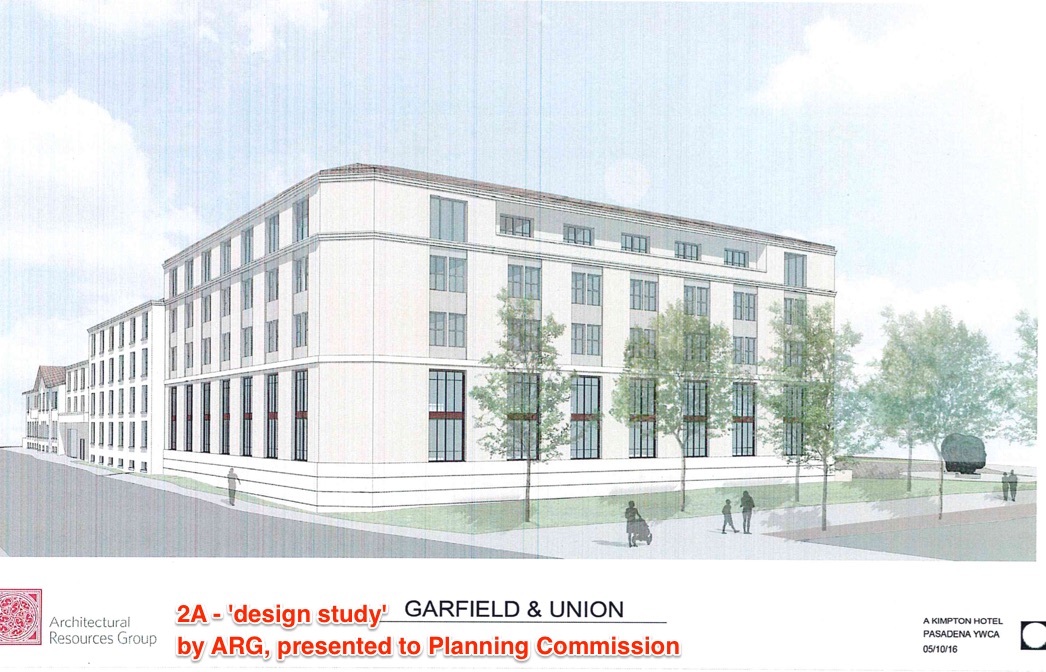 “Alternative 2A”–what staff, with the support of Pasadena Heritage, is urging. It reduces the parkland to a strip of unusable landscaping, removes the Sister City trees, and sticks the REAR END of a 5 or 6-story hotel building into the face of City Hall. (View from Garfield/Union. Click for more renderings.) 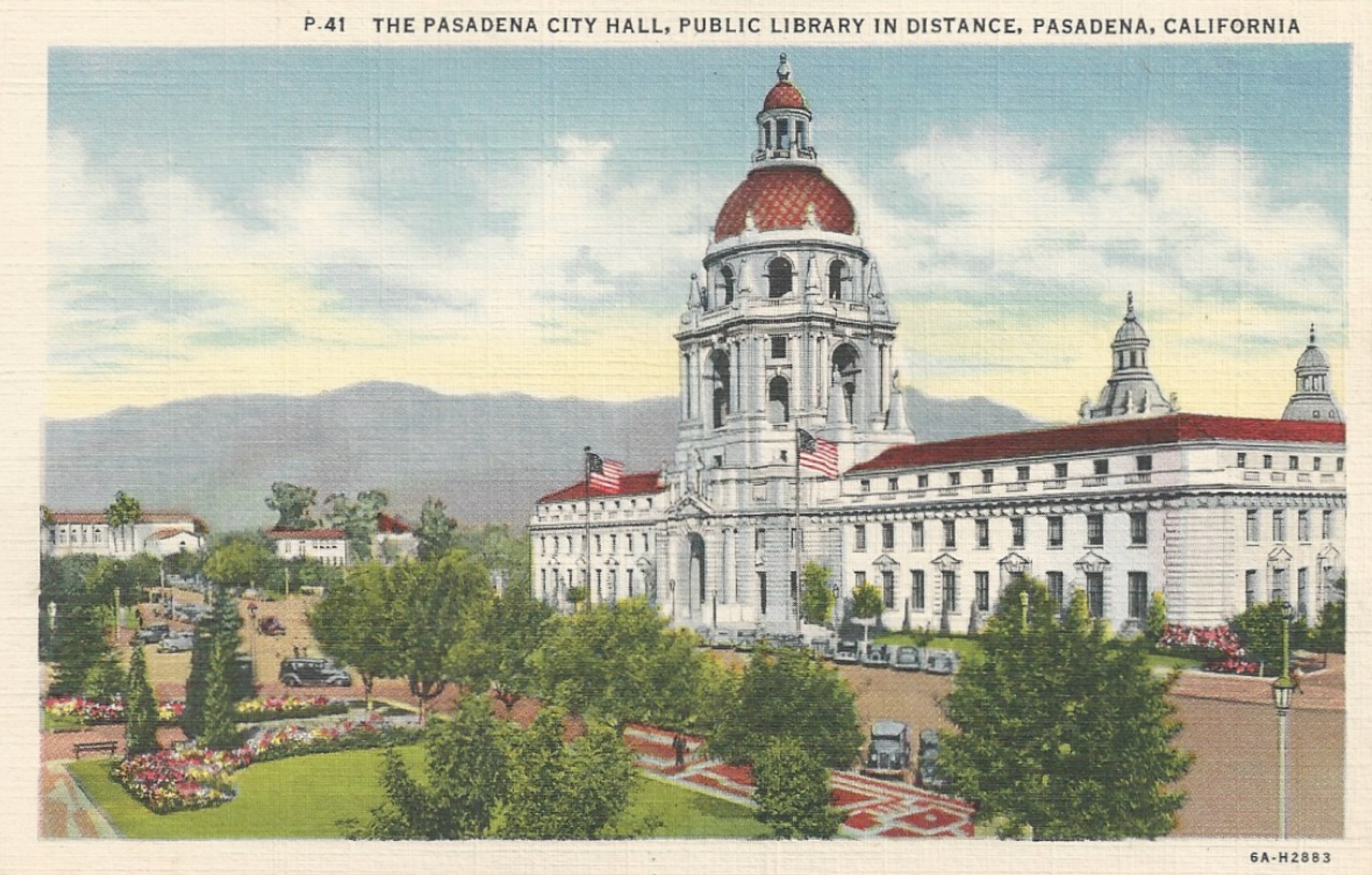 Postcard, ca 1930s, with an idealized view of the gardens in the foreground. Our Civic Center is a nationally recognized artifact of the “City Beautiful” movement, which placed grand, monumental civic buildings in a garden setting. 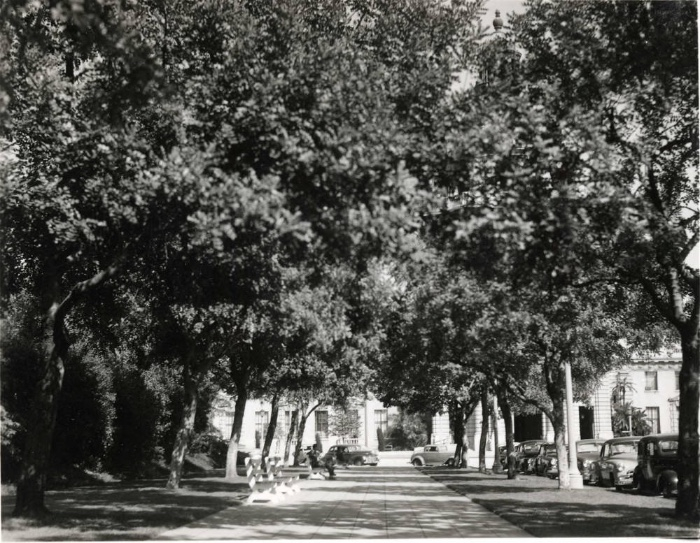 Our Civic Center was intended to have shade and gardens. (Historic photos are courtesy of the Pasadena Public Library through the Pasadena Digital History Collaboration)

The citizens of Pasadena voted in 1923 for the bond measure that purchased the land upon which to build the Civic Center, including the public open spaces that form the garden-like setting of City Hall. Subsequent plans, like a 1925 version of the original plan, cannot replace the plan that the voters approved that was published in the newspaper in 1923 as an exhibit describing what the citizens wanted and were told they were getting.

“2A” as proposed requires the Council to declare the commercially-zoned parkland as “surplus” land that isn’t needed for any public purpose, so that they can turn it over to a private developer to build the hotel. 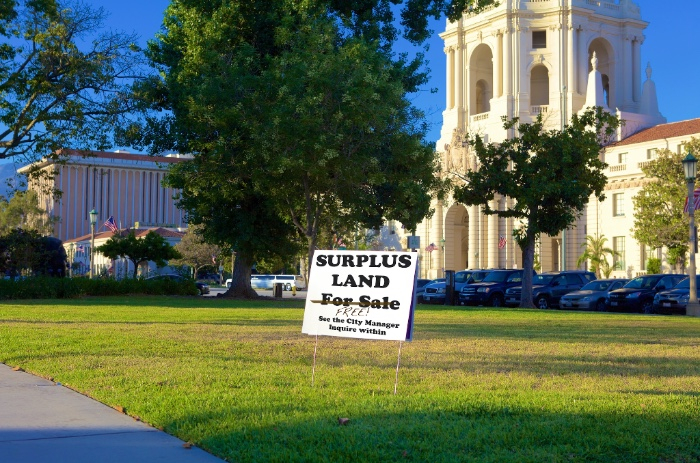 Rehabilitation of the YWCA is secondary. The integrity of our Civic Center is the 1st Priority. 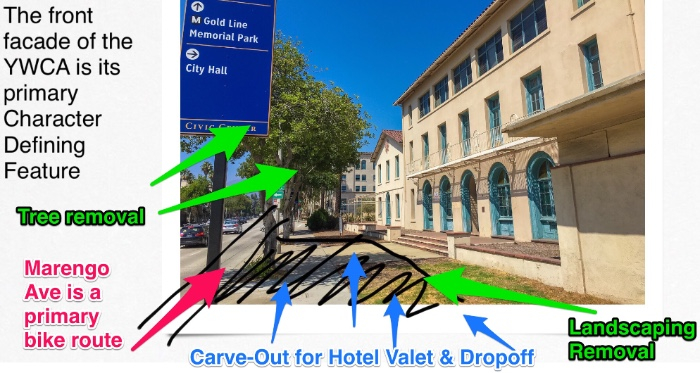 The YWCA has been vacant for 20 years, and all of the alternatives in the Kimpton proposal do an excellent job of rehabilitating the interior of the old YWCA building, a value of $15-20 million. But at what cost to the integrity of the Civic Center? Is it worth creating another Plaza Pasadena in our Civic Center?

We aren’t required to sacrifice the integrity of the Civic Center by demolishing the parkland and the trees.  We aren’t required to place the REAR END (!!) of a 5 or 6-story hotel directly facing City Hall, because we own the land.  We just need to City Council to make the right decision. They have that option–it’s called “Alternative 2E.”
(Naturally, we’re told that a so-called “independent analysis” shows that 2E “doesn’t pencil out.”  See the article by Larry Wilson, below.) 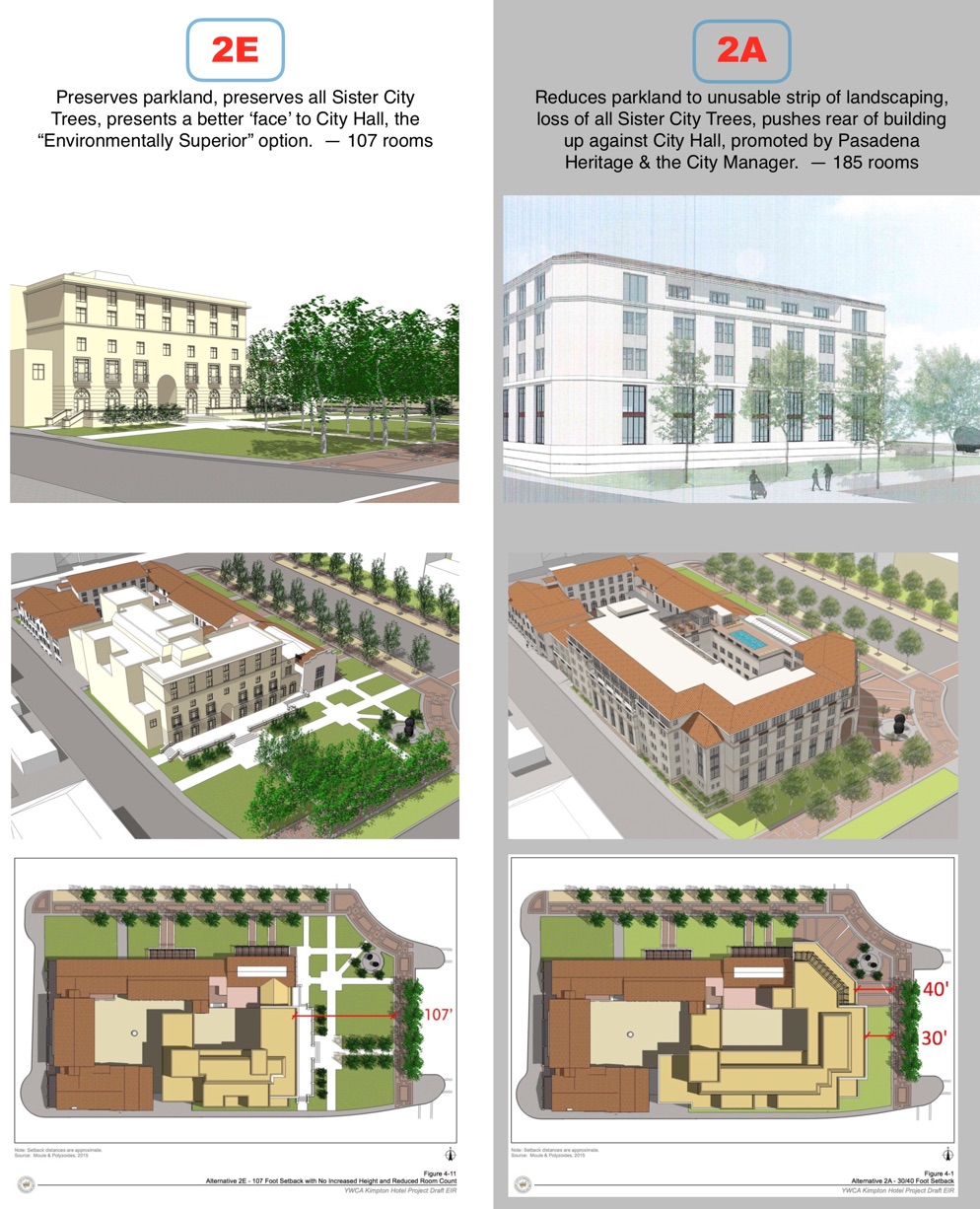 “2E” (on the left) preserves the parkland, trees, and avoids placing the rear end directly in the face of City Hall. vs. “2A” (on the right). (click for larger view. It’s the 2nd slider image

WHAT CAN YOU DO TO HELP?

This Monday night, Aug 15th, City Council will vote.  Unless there is a massive outcry, they will likely agree with the powerful voices backing this plan and will declare the parkland across from City Hall as “surplus” and turn it over to a private developer to build a 180-room hotel and rehabilitate the YWCA.

Don’t let that happen! Please attend the meeting, fill out a speaker card, and urge the City Council to instead vote for Alternative “2E“ (107 rooms), which preserves the parkland and the Sister City Trees, or ask them to start over and ask Pasadena citizens what *they* envision for that land.

These meetings typically start late and stretch on for hours (sometimes as late as 1am), so if you can’t arrive at 7pm, it’s still helpful to arrive late.  Check our Facebook page for live updates.

When you send your email, be sure to cc the City Clerk so that it gets put into the record: cityclerk@cityofpasadena.net

Tell them that the *First Priority* is the *Civic Center*. We will not settle for a project that sells off the public parkland. We believe that the YWCA is an important historic resource but is *secondary* to the the Civic Center as a whole, and that we should not sacrifice the integrity of the Civic Center (as “2A” does) to rehabilitate the YWCA.

The integrity of the Civic Center depends on the *garden setting* that the parkland provides, and it depends on not placing the REAR END (!!) of a 5 or 6-story hotel directly facing City Hall!

Let’s preserve *both* the Y and the integrity of the Civic Center!
“2E” is a better alternative. 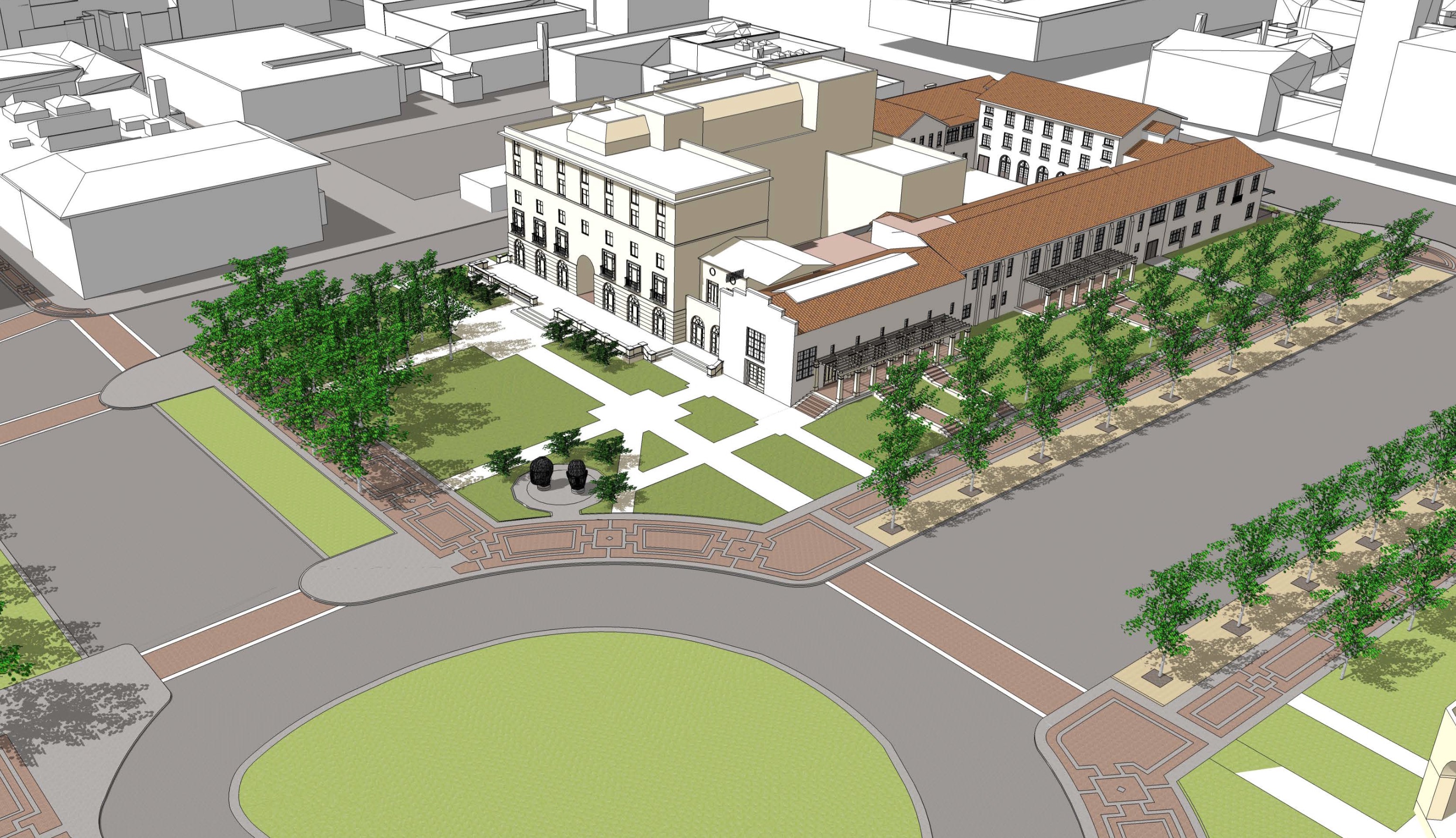 2E preserves the parkland and the Sister City trees, doesn’t put the REAR END of a 5 or 6-story hotel directly in the face of City Hall

← How Should Pasadena Grow? A Strong Towns Curbside Chat about “Productive” vs “Unproductive” Growth in American Cities
“Past and Future of the Gold Line” – 2016 Annual Meeting →